What are Heterobifunctional PEGylation Reagents?

Gelest is introducing a unique range of PEG reagents with dual functionality that enable new approaches to PEGylation for bioconjugates, reduction of surface biofouling, and the formation of polymerizable vesicles for drug transport. These “first of a kind” materials are heterobifunctional materials with an amine at one terminus and at the other terminus, a choice of two different species—one which can undergo radical reactions and one that can undergo hydrolytic condensation. In addition to reacting directly with appropriate functionality of drug or protein substrates, these materials have the potential to undergo polymerization. 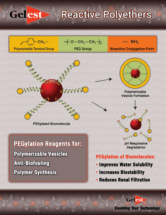 PEGylation, the formation of a conjugate of a protein, peptide, drug, or other bioactive material by linking it with one or more poly(ethylene glycol) chains, in many instances imparts desirable properties to a biomolecule: increased solubility, resistance to metabolic degradation, and reduced immunogenicity. The combination of amine and polymerizable functionality on a PEG provides new options for bioconjugate formation. Depending on the application, the conjugation can be at either terminus, leaving the remaining terminus to polymerize or act as a pH responsive end group. If the unsaturation is utilized as the conjugation point, the amine can undergo ionic interaction, hydrogen bonding, or covalent bond formation with other species. The amine-functional PEGs also create a pathway to pH-responsive behavior.

The new polymerizable PEG materials have the potential to form polymerizable vesicles, stabilizing PEGylated drugs, or act as comonomers for microencapsulated drug delivery. The polymerization can proceed by either free radical organic polymerization or hydrolysis-condensation siloxane polymerization. Related PEG products include a broad range of discrete allyl-terminated PEGs and silacrown, analogs of crown ethers.

The image below depicts PEGylation of a bioactive substance and the benefits of the PEGylation with a PEG terminated by styryl and amine functionality as well as potential pathways for both stabilized vesicle formation by polymerization and pH responsive release of the bioactive.

Exemplary reactions for heterobifunctional PEG polymerization by radical and hydrolytic mechanisms are shown.