‘Hydrophobic’ and ‘hydrophilic’ are frequently used descriptors of surfaces. A surface is hydrophobic if it tends not to adsorb water or be wetted by water. A surface is hydrophilic if it adsorbs water or is wetted by water. More particularly, the terms describe the interaction of the boundary layer of a solid phase with liquid or vapor water. Silanes can be used to modify the interaction of boundary layers of solids with water with a high degree of control, affecting variable degrees of hydrophobicity or hydrophilicity.

The interaction of water with surfaces is frequently used to define surface properties, however, the structure of liquid water is still not solved. The quantum calculation of the structure of an isolated H2O molecule has evolved to the currently accepted model which demonstrates a strong dipole but no lone electron pairs associated with sp3 hybridized orbitals of oxygen. This model of isolated H2O conforms most closely to the vapor state. Extrapolation often leads to the conclusion that water is a collection of individual molecules which associate through dipole interactions. The polar nature of water, with its partial positive and partial negative dipole, explains why bulk water readily dissolves many ionic species and interacts with ionic surfaces.

The difference between isolated vapor phase water and bulk liquid water is much more extreme and can be accounted for by a model relying only on dipole interactions. The properties of bulk liquid water are strongly influenced by hydrogen bond interactions. In the liquid state, despite 80% of the electrons being concerned with bonding, the three atoms of a water molecule do not stay together as discrete molecules. The hydrogen atoms are constantly exchanging between water molecules in a protonation-deprotonation process. Both acids and bases catalyze hydrogen exchange and, even when at its slowest rate of exchange (at pH 7), the average residence time of a hydrogen atom is only about a millisecond.

In the liquid state, water molecules are bound to each other by an average of three hydrogen bonds. Hydrogen bonds arise when a hydrogen that is covalently bound to an oxygen in one molecule of water nears another oxygen from another water molecule. The electrophilic oxygen atom “pulls” the hydrogen closer to itself. The end result is that the hydrogen is now shared (unequally) between the oxygen to which it is covalently bound and the electrophilic oxygen to which it is attracted (O–H⋅⋅⋅O). Each hydrogen bond has an average energy of 20 kJ/mol. This is much less than an O–H covalent bond, which is 460 kJ/mol. Even though an individual hydrogen bond is relatively weak, the large number of hydrogen bonds that exist in water which pull the molecules together have a significant role in giving water its special bulk properties. In ice, water molecules are highly organized with four hydrogen bonds. Liquid water is thought to be a combination of domains of molecules with 3-4 hydrogen bonds separated by domains with 2-3 hydrogen bonds, subject to constant turnover—the flickering cluster model.

Whenever a solid surface interacts with bulk water it is interacting with a soft matter structure, not simply a collection of individual molecules. Surface interactions with water must compete with a variety of internal interactions of liquid phase water—van der Waals forces, dipole interactions, hydrogen bonding, and proton exchange. 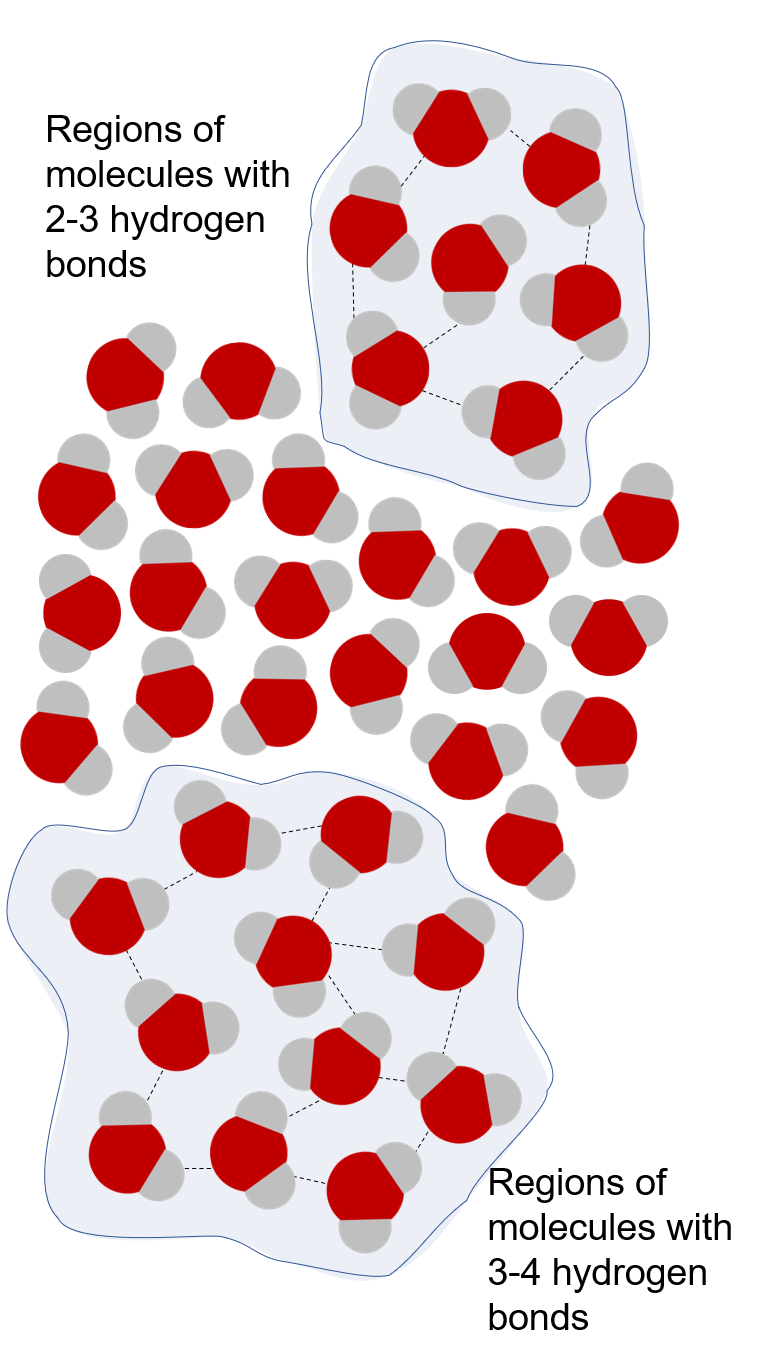 While the contact angle of water on a substrate is a good indicator of the relative hydrophobicity or hydrophilicity of a substrate, it is not a good indicator for the wettability of the substrate by other liquids. The contact angle is given by Young’s equation γsv – γsl = γlv • cosθe where γsl = interfacial surface tension, γlv = surface tension of liquid. Critical surface tension is associated with the wettability or release properties of a solid. It serves as a better predictor of the behavior of a solid with a range of liquids.

In the reinforcement of thermosets and thermoplastics with glass fibers, one approach for optimizing reinforcement is to match the critical surface tension of the silylated glass surface to the surface tension of the polymer in its melt or uncured condition. This has been most helpful in resins with no obvious functionality such as polyethylene and polystyrene. Silane treatment has allowed control of thixotropic activity of silica and clays in paint and coating applications. Immobilization of cellular organelles—including mitochondria, chloroplasts, and microsomes—has been affected by treating silica with alkylsilanes of C8 or greater substitution.